Learning about survivor empowerment has been one of the most rewarding aspects of my work so far. This is some of what I’ve learned from India. 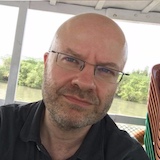 I am a technologist supporting organisations who fight human trafficking and slavery. Contact me!

Of all of the modern slavery topics I’ve been studying, it is perhaps surprising that I’ve become particularly interested in survivor rehabilitation and empowerment. After all, it is a topic which is somewhat distant from my area of expertise. It began after my first trip to Kolkata in 2015. It was my first trip to India and I was working with experienced NGOs and survivors to investigate solutions and strategies to tackle human trafficking in the city - in fact this was my first introduction to the topic. As a career technologist I had never before been challenged to think seriously about an issue like this, and I found it difficult. I was fortunate enough to meet people at Destiny Foundation, who are a social enterprise supporting the most vulnerable survivors of sex trafficking and abuse. After the short trip I returned to Kolkata several times per year to volunteer and support the organisation. I spent a long time listening to experts about the challenges and successes of the organisation, and how their projects work. I realised the topic of survivor empowerment was extremely important, but complex.

On one trip, I went to an International Women’s Day event in Kolkata. A young woman called Shefali, (not her real name), was there to receive an award for the incredible progress she had made since she was trafficked as a child. She’s been supported by Destiny Foundation for years. Like many survivors in India, she’d missed her formal education and hadn’t had the benefit of a family support structure growing up. At the event, she received her award in front of more than 400 people. Seconds later, she took the microphone and delivered a flawless speech, thanking those who had supported her and talking about her career goals. Destiny’s CEO, Smarita Sengupta, reminded me that she’d seen more life than either of us and talking in front of a crowd didn’t really phase her. What were the ingredients of this empowerment?

Destiny is an organisation who have developed their programs with relatively few constraints from strategic funders or other stakeholders. Rather, their programs have simply evolved naturally to meet the needs of survivors. A few years ago, the significance of this hadn’t occurred to me. But now I realise that’s Destiny’s freedom to innovate has been critical to the empowerment of so many people.

Destiny began more than 10 years ago when Smarita started a business employing survivors to make fashion accessories. She’d noticed that vulnerable young women were at risk of re-trafficking because of poverty and a lack of job options. After the business had been running for a while, she noticed that although this tackled some financial issues for survivors, there were other issues which were causing distress and risked re-exploitation. Destiny built an accommodation service for survivors after noticing that homelessness was a risk factor. This provided reassurance, safety and independence for those who needed a place to live when they left the shelter homes at 18 years of age. After noticing that women leaving some shelter homes were particularly vulnerable, Smarita started coordinating with a government shelter home where the most vulnerable children were housed and educated. At an early age, Destiny worked with the home to provided outlets for the children’s trauma.

Chatting with survivors, Destiny’s program seemed to work very well. Actually, it was only relatively recently I realised that constructing projects and services for survivors was only a part of why Destiny was successful. Destiny’s mantra is “One Life at a Time”. It’s a slogan that took me about two years to fully understand and appreciate.

Last year, Destiny joined the GSBI accelerator program to develop the business plans necessary to expand the organisation. A big part of GSBI was examining Destiny’s own impact model. It took a lot of thought and some excellent support from our GSBI mentors, but we eventually began to understand why Destiny’s model was successful: The model is longitudinal.

Rather than pushing lots of beneficiaries through one or two of its projects for short periods, it focusses on offering more comprehensive support to fewer individuals, for longer, across all or some of its projects. Destiny’s focus isn’t numbers. It’s about personalised care. Many of Destiny’s beneficiaries have come from the shelter home which is where they first connected to Destiny. On leaving the home many choose to use Destiny’s survivor accommodation service, or work as an employee for Destiny’s social enterprise. Some just receive occasional counselling or mentoring. Some of Destiny’s beneficiaries choose to stay connected to Destiny long after they have found new opportunities, started a family, or moved elsewhere.

Destiny’s culture is one that feels very much like a family. It’s a warm and loving organisation. We realised that it was this community of support that binds together the various services that was a huge part of its success. In India, many sex trafficking survivors don’t have a trusted community. Survivors are often unable to go back to their family due to the stigma. When people don’t have the support from a trusted community of friends or family - particularly spanning major life events such as moving home or job - then it doesn’t matter how good the individual support programs are. If a survivor doesn’t have a community for support then there is a risk of re-exploitation.

It’s not quite the whole story. As I mentioned before, Destiny evolved with survivor needs as the primary concern, rather than impact metrics demanded by strategic funders. It’s meant that Destiny’s structure can be less rigid compared to many organisations. Rather than fixed term programs for beneficiaries, support is personalised to the individual. And most importantly, space is given so that survivors can explore their own spirituality - and their own destiny. Many survivors have moved on from Destiny. They have begun families, moved cities and developed their own support structures - they have done so on their own terms and at their own pace. Most choose to keep in touch with staff and supporters - it’s just one of the lovely things about the organisation.

I think I was drawn to this topic because it made me ask myself about my own empowerment. I realised that Destiny’s support programs and community structure is actually a reflection of what I was lucky enough to have as I grew up. If either money, accommodation or my family had suddenly disappeared then I would have become vulnerable too. We all need these things. We all need community. We all need a few close friends or relatives who we can confide in, seek advice from, or just to chat with. People who care. Perversely, criminals will often take advantage of the same vulnerabilities when searching for victims. The promise of a home, money and community are often used to lure vulnerable people into crime.

I spent 6 months in Kolkata in 2018 and when I returned home I compared the journey of survivors supported by Destiny with those in the UK. In the UK we seem to have attempted to make survivor empowerment into some kind of system or process. The UK system seems to be designed for the convenience of other systems and organisations rather than the very people it should be helping. Rigid processes create stress and are difficult to navigate. Processes like these are actually disempowering. If we are serious about helping people succeed and avoid re-exploitation then the UK must re-think the approach to be centred around the individual, not around rigid systems and fixed term programs. You can’t engineer empowerment.